Call for Articles: The Order of Death. On lists, statistics and hidden figures about dying and the deceased

In addition to media images of overcrowded and overburdened intensive care units as a result of the Covid 19 pandemic, the daily reported case numbers of new infections or deaths are also, among other things, a stylistic device to determine the extent of a health catastrophe. While readers and viewers perceive such news emotionally, these data become the inputs with which mathematical models are fed in order to predict a certain course of events. These anonymous numbers are implicitly based on lists of deceased people with names, dates of birth and other information; nominal lists that are not intended for the public for reasons of data protection.

In the early modern period, statistical data on the dead were publicly posted, as in the form of the Bills of mortality during the Great Plague of London 1665/66. But victims of political violence were also publicised in an orderly way, for example to denounce the cruelty of a regime, as the journalist Louis-Marie Prudhomme did shortly after the Reign of Terror in France (1793/94).

In the nineteenth century, the lists of fallen soldiers (sometimes carved in stone) were used to immortalise their heroic sacrifice; a form of representation that continues to the present day. The blacklists, in which opponents of the regime are listed, represent the bureaucratic side of state terror. Whether victims of genocides, assassinations, murders, domestic violence, accidents, natural disasters or pandemics, lists are never 'innocent'; they always pursue certain intentions. This raises the question of the actors who determine which criteria apply or who is (arbitrarily) not included. For if the fallen on the 'altar of the fatherland' honour the same, a high suicide rate counteracts this very honour.

While lists may be located in a Foucauldian understanding of order, they almost have the status of an independent literary genre according to Umberto Eco (The Infinity of Lists) or Sabine Mainberger (Die Kunst des Aufzählens). Hence, we can experience the mutability of lists between mourning, statistics, crisis management and memory.

The planned collective volume shall contain contributions from scholars in the humanities, cultural studies and social sciences. The time frame ranges from the early modern period to the present. Contributions are requested on the following topics, but not limited to:

The contributions should preferably deal with the concept of agency and address the following questions:

Abtract
An abstract of no more than 400 words and a biographical note of approx. 50 words are requested electronically to moises.prieto@hist.unibe.ch by 12 April 2021 at the latest. The aim is to publish a collective volume within the series Tod und Agency by Böhlau Verlag. 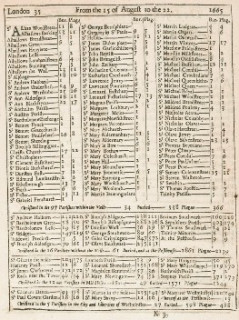