CfP: METIS Doctoral School 2021 - Spectacle and the spectacular in the contemporary era

Following the two last editions of the Metis summer schools "Media and politics from the French Revolution to the present day" (Padua, 2016), and "Mass culture: new approaches, new issues (20th-21st centuries)" (Versailles and Saint-Quentin-en-Yvelines, 2018), the next doctoral school will explore the notions of spectacle and the spectacular in the contemporary era.

Description of the project
Since its publication, Guy Debord's La Société du Spectacle (1967) has faced contrasting interpretations and receptions. A situationist blaze announcing Paris’ May 68 at its first published edition, its subversive power has been gradually diminished as it has entered mainstream language, thus becoming a catch-all synonym for media overexposure. Yet, many researchers aim at extending or renewing the Debordian approach in works of cultural history.

In this prospect, this doctoral school invites all participants to explore and discuss the notion of spectacle. An emphasis will be placed on recent developments in the history of spectacles. By starting with the actual performance itself, including both its codes and uses, we will explore the venues of the spectacle (e.g., the architecture of theaters and other ephemeral spaces or devices), its commercial organization, its associated professions (with a particular interest on shadow professions, such as theater drivers), as well as formerly marginalized forms, such as the circus, dance, music hall, etc. We would like case studies to be a starting point to articulate a more anthropological reflection on the spectacle as a social model and a form of communication.

More broadly and beyond the very object of the performance, this general theme aims at exploring the notion of the "spectacular", including its different modalities and functions in contemporary society. As Pascale Goetschel has pointed out in an issue of Sociétés et représentations (2011/31), the actual noun “spectacular” is recent (1941) and bears a strong negative connotation. Yet, "each era of the nineteenth century, has the feeling of experiencing an excess of the spectacular, which arouses both wonder and annoyance," as Jean-Claude Yon has observed in his Histoire du théâtre à Paris de la Révolution à la Belle Époque (Aubier, 2012). How can we explain the suspicion towards a dimension often associated with inauthenticity, passivity and commercialism, and where does it come from? And how was this concept reinvested at certain times or by various researchers, as in the criticism of the " criticism of the spectacle " developed by Jacques Rancière?

The conferences and workshops will explore three main lines:

1) A first line will address the changing modalities of cultural consumption. In this context, the role of the media and the evolution of technical means for a new form of perception of events, such as sports events, can be outlined. At a different stage, the role of exhibitions – both industrial and cultural – within the development of stage settings of merchandise or works of art can be mentioned. The history of the spectacles itself is fully relevant in this first axis, in particular with regard to non-theatrical spectacles that call upon all the senses of the spectators.

2) A second axis will explore the connections between spectacle and politics. This line may involve both the policing and the politics of spectacles, including the mechanisms of control and censorship. It also includes the development and the evolution of a “theatricalisation” of politics and policies - the theatrical metaphor being often used to describe the "backstage" of public life. However, in opposition to an analysis insisting exclusively on the alienating dimension of the spectacle, we will also consider the experimentation of citizen and democratic forms of mass mobilisation through certain demonstrations or symbolic actions.

3) A third and last axis proposes to question the notion of “spectacularisation” of daily life, in particular within the urban context – in the wake of Walter Benjamin's work on Parisian passages. In this respect, we will question to what extent passers-by and strollers are facing a display of images and all kinds of staged settings in public space. A multiplicity of places can be taken into account: the street, fairs, churches and other worship places, theatres, music halls, museums, exhibitions, shows and festivals... On a different note, although the notion of spectacle is often linked to a collective mass experience, new forms of media are emerging, such as night-time radio or intimate television, that favour self-exposure and the mechanisms of a personal psychology.

The contributions of the participants and speakers will provide an opportunity to address various issues, be they aesthetic, political, social, artistic or ethical. Comparative, and transnational dimensions, as well as an intermedia approach, will be favoured in order to explore the cross-fertilisation and mutual influences of certain mechanisms, through the processes of transfer, adaptation or transcreation. The chronological framework includes the contemporary period, i.e. from the end of the 18th century to the present day. It will include the digital turn and its impact on the discourses and practices studied herein.

Program and schedule of activities
The doctoral school will be held from Monday afternoon to Friday,1 pm, in English and French (passive knowledge of both languages is necessary). Mornings will be devoted to presentations both on theoretical and methodological issues. They will be given by senior researchers and recognized specialists. The afternoons will be dedicated to workshops during which graduate students (PhD and MA 2 students) will present their ongoing research – with a connection to the general theme of the doctoral school. The program will also include visits to cultural and heritage institutions in the Lausanne area.

We would like this meeting to take place face-to-face, as a Doctoral School only makes sense if it provides regular interaction between participants. The applicants must therefore agree to travel to Lausanne. If the health situation should reduce our hopes for a real meeting, we will discuss the possibility of a distance meeting.

Applications
The doctoral school is open to a maximum of 20 participants, from Master 2 to post-doctoral degrees. Applicants are expected to send a file with the following documents:
• an academic CV
• a presentation of current research, including a description of the sources used
• a letter of motivation

These documents can be submitted in English or French. They should be sent in a single PDF file by email before midnight on June 21st 2021 to: emmanuelle.paccaud@unil.ch. Please entitle your message: "Summer School 2021". The results of the application procedure will be announced on July 15th 2021.

Registration
The selected candidates will have to pay a fee of 80 euros which will cover the organisational costs, lunches and cultural events. A platform will allow them to access various options for accommodation, ranging from youth hostels (between 50 and 90 Swiss francs, for shared or single rooms) to more comfortable hotels.

Scholarships
Participants who wish to apply for a scholarship – in particular if their affiliation university cannot finance their stay – should specify it in their letter of motivation. Scholarships will be awarded according to the following criteria: quality of academic background, research experience and personal motivation. 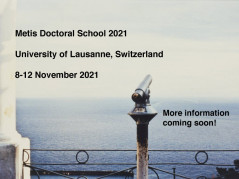