Towns were producers, organisers, and brokers of martial culture within the rapidly changing political world of late medieval Europe. Towns’ defences against and participation in local, regional and extra regional conflicts shaped military organisation and urban martial culture. This martial culture developed at the intersection of legal prerogatives, political requirements, physical skills, knowledge, and the evolving societal significance of the ownership and use of weapons. Based on the preliminary findings of the research project “Martial Culture in Medieval Towns” (University of Bern, funded by SNF 2018-22), this conference aims to:

We welcome the submission of proposals for posters with 10min video presentations. These contributions are intended in digital format, adding to the presential papers during the conference. The accepted posters and videos will be published on the blog of the research project and stored in the academic public repository of the University of Bern (providing DoI),
with links to the videos stored on Vimeo. Selected contributions will be displayed during the conference, and a media station will allow the conference participants to browse through the content.

Proposal should be sent to daniel.jaquet(at)hist.unibe.ch until the 30th May 2021 with
• Name and affiliation
• Abstract of 450-500s (including space)
• One key image (attached with the email, .png, .jpeg, .tiff)
• Description of the connection of the poster to one of the subtopics of the conference, up to 1000s (bibliographical references excluded of the limit of signs)

Notification of acceptance will be sent on the 30th June 2021, along with the guidelines for the files (poster and video format1). The submission of the files is due no later than the 30th September 202

Organised by:
University of Berne 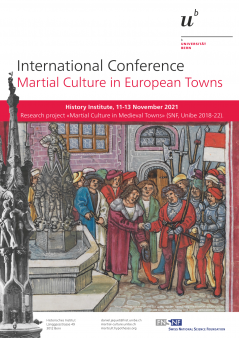