A digital perspective on ancient and fictional worlds

[PDF-Version of the report]

Digital methods provide new ways to preserve, share and study historical data. Digital Humanities scholars have built innovative tools to study the information made accessible by digitization. In this session, the first contribution applies computational tools to determine what can be learned from historical texts such as medieval legal charters once they are numerized. The second paper introduces a set of tools developed for the annotation and analysis of Coptic texts. And finally the third one invites us to travel to Faulkner imaginary county of Yoknapatawpha.

Exploring a model for the semantics of Medieval Legal Charters

Because of their legal significance, legal charters often survive as historical evidence of the workings of a society. Today those documents are made conveniently available on the Internet1, which unveils new ways of exploring the text content of historical records. Methods such as natural processing and data mining techniques are used to auto-matically extract information about people, places and events, and even explore the relationships between them2. Markup can also be applied to charters, the Charters Encoding Initiative developed a markup scheme (see Fig. 1) derived from TEI that is specific for charter texts. JOHN BRADLEY and ALICE RIO (London, UK), MATTHEW HAMMOND and DAUVIT BROUN (Glasgow, UK) approach the prosopographical and socio economic data con-tained in charters by taking a structured data approach. In Prosopography of Anglo-Saxon England, People of Medi-eval Scotland and Making of Charlemagne’s Europe projects, only the formal structures of the charters are made available, not the full texts themselves. The authors use this factoid approach to modelize the complex processes formalized by the charters under scrutiny. 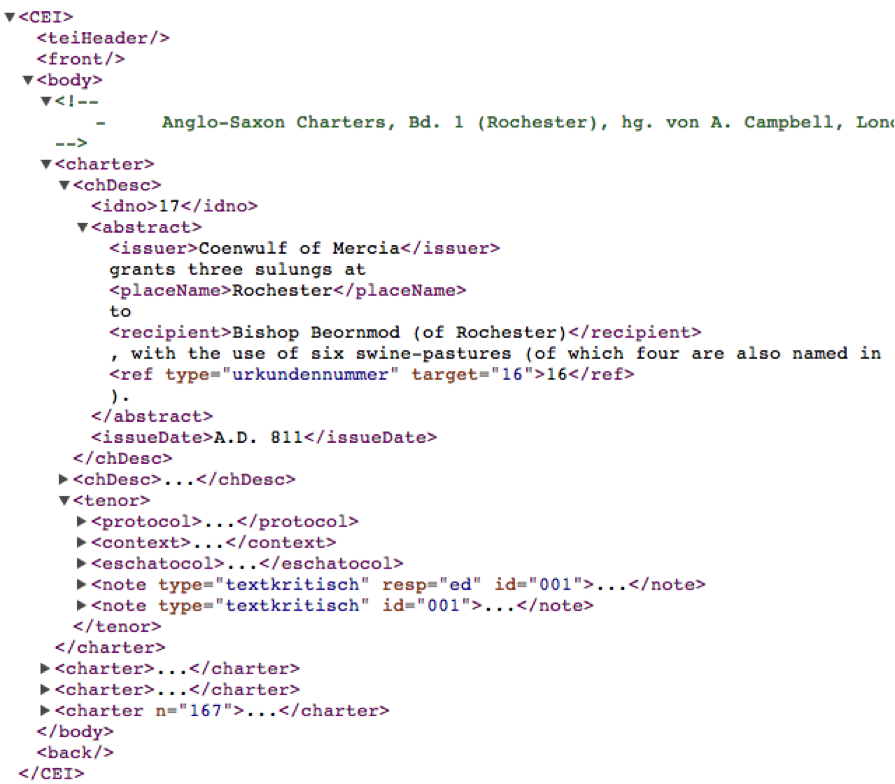 Digitizing the Dead and Dismembered: DH Technologies for the Study of Coptic Texts3

The Coptic language is the latest stage of the Egyptian language, it evolved from the hieroglyphs of the pharaonic era; that makes it interesting to several humanistic discipline (linguistics, biblical study, ancient history, …). Computational tools to study Coptic have been missing until recently, unlike for Latin or Greek4. The fragmented nature of Coptic manuscripts conservation explains in part the difficulty of studying this language: most texts are damaged, incomplete and dismembered manuscripts, papyri and ostraca whose parts are dispersed in libraries and museums around the world. CAROLINE T. SCHROEDER (Stockton, CA, USA) and AMIR ZELDES (Berlin, Germany) are developing SCRIPTORIUM (Sahidic CorpusResearch: Internet Platform for Interdisciplinary multilayer Methods), a set of open-source technologies and methodologies for interdisciplinary research in the Coptic language. Taking into account the specific aspects of Coptic5 (see Fig. 2), these tools allow tokenizing and part-of speech annotations for this language, but also for every language of the Egyptian family.

Over the course of his career acclaimed author William Faulkner wrote 15 novels and 48 short stories taking place in the fictional county of Yoknapatawpha. DOTTY DYE (Tempe, AZ, USA), JULIE NAPOLIN (New York, NY, USA), ELIZABETH CORNELL (Bronx, NY, USA) and WORTHY MARTIN (Charlotteville, VA, USA) collaborate on building Digital Yoknapatawpha, a critical database, interactive map, timeline, and network visualization that aims to unite the works of William Faulkner. To expand the understanding of the author creation, the layered con-nections between people, places and events (palimpsest of place) are represented using an interactive map and chronological/narrative timelines (see Fig. 3). This study put into a new light the inconsistencies and ambiguities inside Faulkner’s work, allowing the researchers to engage and confront those in original and practical ways. 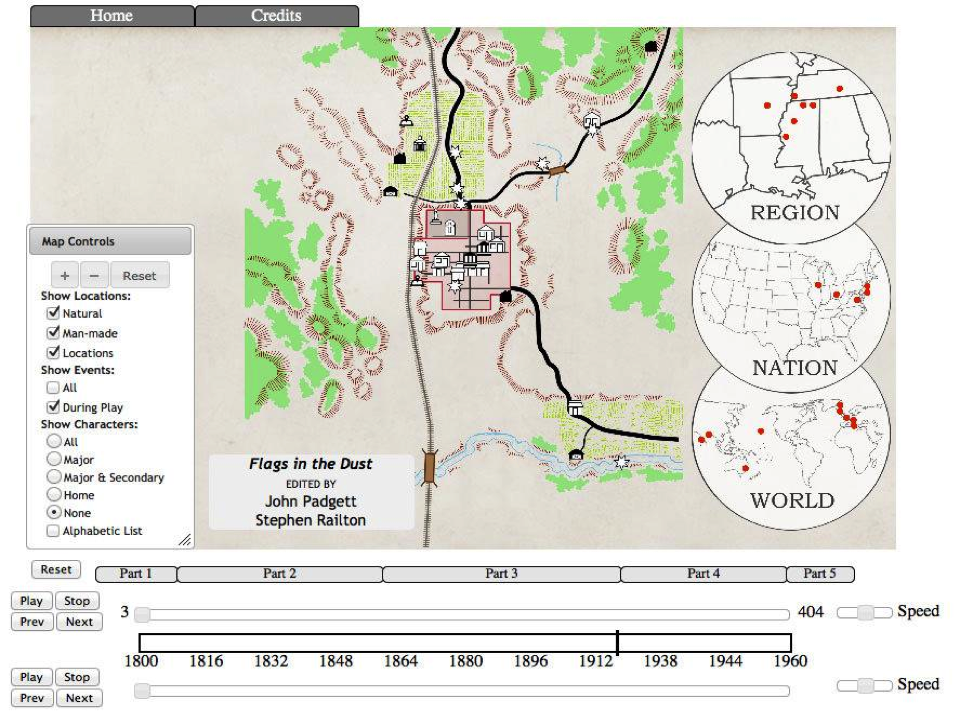 Those presentations demonstrate the usage of digital tools in the works of scholars that are working with ancient languages, (corpus) linguists, or simply William Faulkner enthusiasts. The digitalization of historical and literary artefacts opens a wealth of new study opportunities, tackling common issues such as scaling, fragmentation and complexity. The underlying data can be examined in various angles offered by different digital modelization choices: markup, annotations and interactive maps in this case.

1. see http://monasterium.net/ e.g.
2. see http://www.chartex.org/
3. presentation slides: http://coptic.pacific.edu/dh2014
4. see http://www.perseus.tufts.edu/hopper/ e.g.
5. Coptic is an agglutinative language, morphemes inside a single word can have different languages of origin. This means that normalizing and annotating needs to be done on the morpheme and word levels.

A digital perspective on ancient and fictional worlds
29. August 2014 / JB

Reports from the Digital Humanities Conference 2014 in Lausanne

More about the Digital Humanities 2014 Conference